Animal Crossing: New Horizons will add new Mario-themed items and costumes to the game to celebrate Mario's 35th anniversary. The endless art world has turned the relatively simple Mario new furniture catalog into exquisite island designs in just a few days. These include Mario, Luigi, Peach, and Wario costumes, as well as some decorative items that the game didn't have before.

Players can "collect" coins, interactively placed items (such as stars and mushrooms), hovering squares and giant mushrooms, on which items can be placed, and the most exciting thing is-the curved pipe can instantly transport you to the second pipe is placed in other locations on the island. 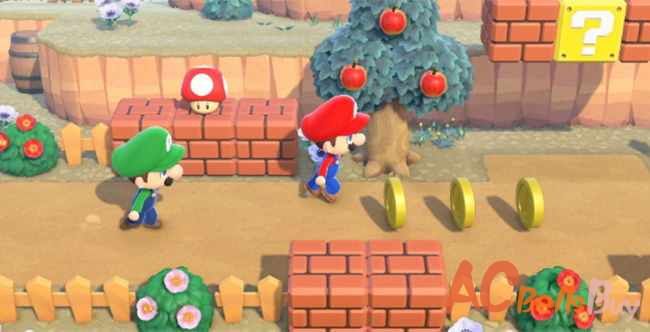 All Mario items are available through a separate tab of the Nook Shopping app, but the app limits you to order 5 items per day. This means that if you want to conduct such a well-designed course, you will need to spend a lot of time traveling.

Some smart players did not specifically use Mario items to make the Mario stage, but used items such as Warp Pipes and floating blocks more cleverly. The management makes it easier to transport the island, and the floating blocks can be used to make tunnels, which is also a function that the items and functions available in the previous game could not be achieved.

Smart players will always use the various items that appear in the game to create the island a second time, giving people surprises. I wonder what kind of creation you will do when Mario enters animal crossing? If you can't wait, come to ACBellsbuy, we will provide you with Mario theme packs and newly updated Animal Crossing Items, which is your unhindered use of your imagination in island design.