Home  >  News  >  How to Get Your Favorite ACNH Villager | Sasha, Shino, and Marshal

How to Get Your Favorite ACNH Villager | Sasha, Shino, and Marshal

Sasha, Shino, and Marshal are the most popular villagers since the New Horizons 2.0 update. Other villagers are also very popular.

After the ACNH 2.0 upgrade, 16 new villagers were introduced. Of the 16 animal villagers, 8 are brand new, while the other 8 are returning to New Horizons. To make the new villagers live more comfortably, ACNH Design Island should be reasonable. Animal villagers should leave enough space for movement among each other. Before the arrival of new villagers, we have to prepare rooms for the villagers in advance. ACNH Shop supports Animal Crossing Bells For Sale. To distinguish different villagers, different flowers can be planted in front of the animal villagers. Flower seeds need to be purchased from Nook's Cranny Shop. Nook's Cranny offers selling and buying services such as Birch Flooring, Rose Plant, Watering Can, and more.

Why are Sasha, Shino, and Marshal popular? 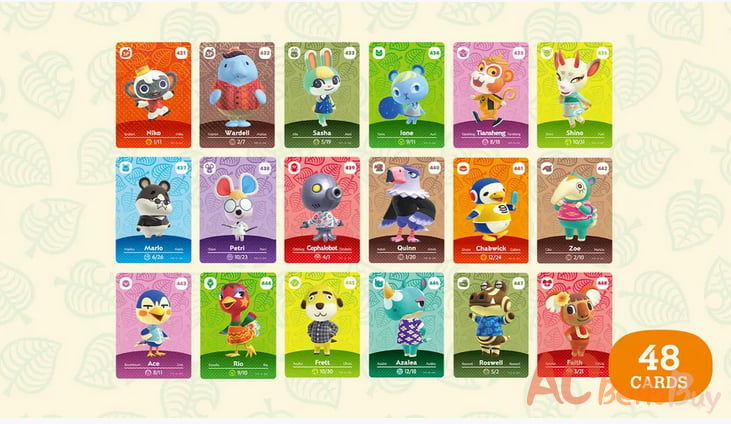 How to get animal villagers in ACNH?

Amiibo cards are one way to get the New Horizons villagers you want. You can invite villagers to your campsite by scanning their cards at the Nook Stop in Resident services. Even if you have open spaces on your island, however, you'll need to convince them to move into your island — by buying them stuff and having them visit randomly.

Visit Mystery tour with Nook Miles. Log in to Mystery Island with Nook Miles Tickets. Wander around, and once you find the villager you want. you just need to walk up to them and talk to them and let them move in. They will agree.

Island campsites are used to greet traveling animal villagers. Take the opportunity to invite him to stay.

How to get along with the animal villagers on the island

Note that before you are ready to invite new villagers, make sure you have open space on your island. If the island has no vacant land, even if new villagers promise to come to your island, they will not be able to move in the end. Successfully invited new villagers, please communicate with them regularly. During the conversation, you can give each other gifts. Buy Animal Crossing Items from Acbellsbuy. Nook Miles Tickets or Star Wand can all be given as gifts to new villagers. The island can hold up to 10 villagers. please invite them carefully. The arrival of new animal villagers also helps to quickly upgrade the island to 5 stars.