March 20, 2020, is when Animal Crossing New Horizons officially launches on Switch. Nintendo updated the 1st Anniversary cake for the 1st anniversary. So, this year there will be a 2nd Anniversary cake.

There will also be special furniture and clothes for the anniversary celebration, and players can get 2nd Anniversary candles by collecting event-specific materials. Complete tasks on time to get anniversary items. It will be very helpful to have ACNH Bells ready in advance for the upcoming 2nd anniversary.

Players who have experienced the November 2021 update will know that Nintendo says it will no longer offer a free major update. With the 2nd anniversary approaching, free small item updates are available. This 2nd anniversary is a good time for players to return to the big island home. Therefore, this update is also an expectation of most players.

Last year's 1st Anniversary cake was attributed to miscellaneous furniture items. If you have worked hard on 1st Anniversary cakes, you will know that the colors of 1st Anniversary cakes are colorful. On the very top are Nook Inc. leaves, an apple tree, a cedar tree, a ladder, and a topographic hard hat. Small shrubs complete the cake decoration on each side and a candle on top that you can blow out and rekindle. 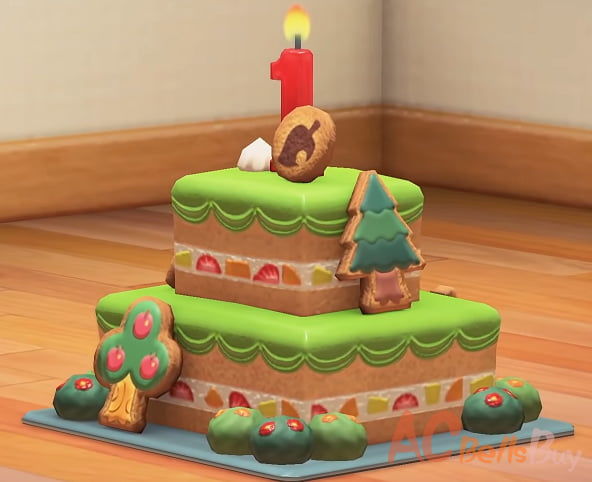 Anniversary cakes fall under the Furniture Items category. Open the backpack to find a suitable place for your souvenir cake. Floors and tables are permitted. No matter where it is placed, this is great decoration.

An anniversary cake placement requires a 1.0 x 1.0 size. You can buy it for 20,000 Animal Crossing bells if your account is full enough. When you buy and sell again, you will only get 5000 bells. If you're in Happy Home Paradise, you'll only be allowed to unlock the anniversary cake for use in holiday home designs after you've completed 27-holiday homes.