Closing out ACNH's May event, there will be events in June, including new upgrades, new fish, new bugs, new DIY recipes, new villagers, and more. In June, we will have a lot of things that we need to do.

After the ACNH 2.0 update, Animal Crossing Items are up to 9000+. Arrange and combine freely all ACNH Items to create an island landscape that is unique to the player. Participate in the June event, follow the New Horizons guidelines, follow the rules and earn in-game rewards. The reward items obtained can be used as decorations to decorate the island or can be exchanged for ACNH Bells at Nook's Cranny. AC Bells, as the only currency available on the island, can be purchased at Nook's Cranny, ABLE Sister Shop, and Nook Shopping. AC Items are required. In conclusion, we have a lot to do every day. The first is 7 events in June, you can plan accordingly according to the event time. 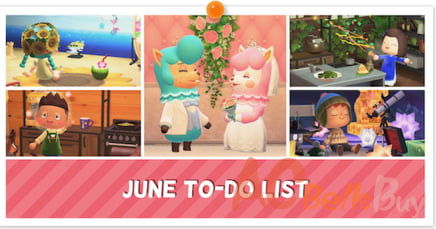 Wedding Season (Northern Hemipshere): Event time June 1 to June 31. Reese and Cyrus need your help this Wedding Season! Head on over to Harv's Island and take photos that will last forever!

Flick's Bug-Off (Northern Hemipshere): Event time June 26. Catch bugs within the specified time. The bugs you catch can be redeemed for points.

Summer Solstice (Northern Hemipshere): June 15 to June 21. Celebrate the celestial event with summery sunflowers! You can purchase the Sunflower Crown and Sunflower Rug on Nook Shopping.

What follows is a list of all the bugs in June and a list of bugs that will leave after June. The most commonly used ACNH Tool for catching bugs is Net. Among ACNH Items are Star Net, Outdoorsy Net, Colorful Net, Flimsy Net, and Golden Net. For practicality, I recommend Golden Net. It will make you have a better experience. ACNH Island is full of bugs. They may be sitting on or hiding in trees, hiding under rocks, buzzing around certain items or flowers, skating over the surface of the water, or simply flying around in the air. 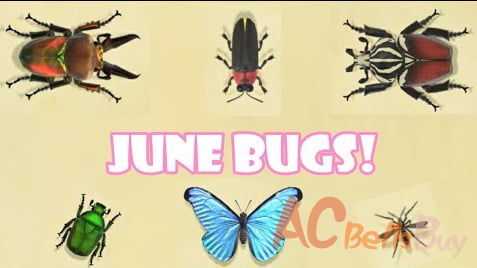 This is followed by a list of all the fish in June and the ones that will leave after June. Fishing tools available are Fish Fishing Rod, Golden Rod, Colorful Fishing Rod, and Outdoorsy Fishing Rod. ACNH Islands also have a Fishing Tourney from time to time. Replacing rods during a race can be a waste of time. Therefore, I recommend Golden Rod. In addition to Golden Rod, you also need to Buy Animal Crossing Bells to get Bait.

All Fish in June - Northern Hemisphere

All Fish in June - Southern Hemisphere